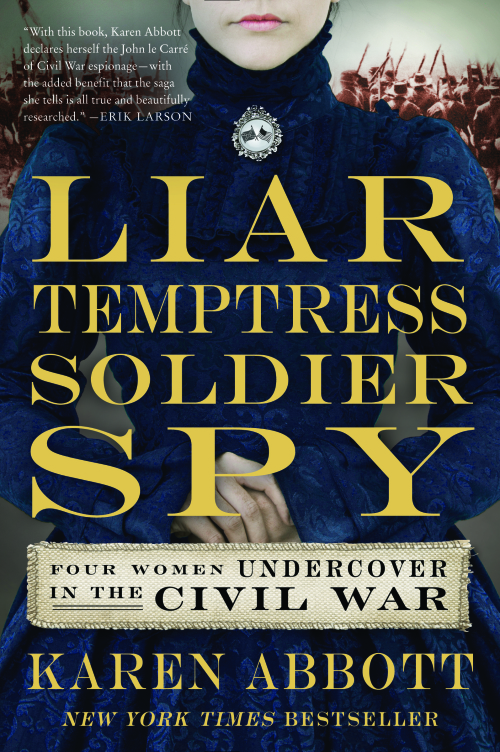 Seventeen-year-old Belle Boyd, an avowed rebel with a dangerous temper, shot a Union soldier in her home and became a courier and spy for the Confederate army, using her considerable charms to seduce men on both sides. Emma Edmonds disguised herself as a man to enlist as a Union private named “Frank Thompson,” witnessing the bloodiest battles of the war and infiltrating enemy lines, all the while fearing that her past would catch up with her. The beautiful widow Rose O’Neal Greenhow engaged in affairs with powerful Northern politicians, used her young daughter to send information to Southern generals, and sailed abroad to lobby for the Confederacy, a journey that cost her more than she ever imagined. Elizabeth Van Lew, a wealthy Richmond abolitionist, hid behind her proper Southern manners as she orchestrated a far-reaching espionage ring—even placing a former slave inside the Confederate White House—right under the noses of increasingly suspicious rebel detectives.

Karen Abbott's pulse-quickening narrative reads like the finest fiction, seamlessly weaving the adventures of these four heroines across the tumultuous landscape of a broken America, and evoking a secret world that will surprise even the most avid fan of the Civil War. With a cast of real-life characters including Walt Whitman, Nathaniel Hawthorne, General Stonewall Jackson, detective Allan Pinkerton, Abraham and Mary Todd Lincoln, and Emperor Napoleon III, LIAR, TEMPTRESS, SOLDIER, SPY draws the reader into the war as these daring women lived it, constantly courting risk and raising the stakes, and not one of them ever quite what she seemed.

"With this book, Karen Abbott declares herself the John le Carré of Civil War espionage, with the added benefit that the saga she tells is all true and beautifully researched. Her four protagonists, exuding charm, adept at skulduggery, take us on a sweeping and bloody jaunt across the Civil War landscape, into an intimate realm of warfare that will yield for even the most hard-core Civil War buff a wholly fresh perspective on those deadly days."

— Erik Larson, New York Times bestselling author of The Devil in the White City and In the Garden of Beasts

"In the gripping book, Abbott tells the moving and fascinating story of four women who played unconventional roles during the Civil War... a remarkable story of passion, strength, and resilience."

"Liar, Temptress, Soldier, Spy by Karen Abbott is a masterpiece of narrative storytelling, backed by impeccable research and extraordinary material. I was gripped by every page."

“This inspiring collective biography reads like a novel while shedding some much-needed light on fascinating chapters in both Civil War and women’s history.”

"Abbott has performed an invaluable service by revealing in such vivid detail the extraordinary lives of these women who involved themselves so dangerously in the Civil War. This is that rare work of history that reads like a novel—and a really good one at that—and in which the truth is more thrilling than fiction."

"Thrilling, illuminating, heart-pounding. Liar, Temptress, Soldier, Spy reads like a crackling espionage novel and resonates as only the most compelling history can. Abbott brings to vivid life four extraordinary and audacious women, and runs glorious roughshod over all our traditional notions of the role of women in the Civil War."

— Megan Abbott, Edgar-award winning author of Dare Me and The Fever

"Karen Abbott's powerful narrative is first rate American history about a fascinating, little-known chapter of the Civil War, as well as a compulsive, thrilling saga of espionage. Brilliant storytelling, highly accessible, and impossible to put down."

— Gilbert King, Pulitzer Prize-winning author of Devil in the Grove: Thurgood Marshall, the Groveland Boys, and the Dawn of a New America.

"The subjects of Karen Abbott's gripping story Liar, Temptress, Soldier, Spy leap up— and almost off—the page… an irresistibly good tale of Civil War espionage and a reminder that the heroes of our history are often found in the most unexpected places."

"Ian Fleming could not have invented better spies…nor have written about them with any more suspense.”

–Robert Hicks, New York Times bestselling author of The Widow of the South and A Separate Country

"Liar, Temptress, Soldier, Spy offers a riveting, fresh perspective on the most defining event in American history. Abbott takes us through secret missions and clandestine rendezvous to intensely realized scenes of the war's key battles, creating a rich, true world that captured me from the first line to the last. Beautifully written, meticulously researched, and paced like an edge-of-your-seat-novel---I love this big, ambitious, unstoppable book."

"It is no small task for a writer to wade into the well-swum waters of the American Civil War and emerge with a book that manages to enhance the existing canon while holding the attention of casual readers and history buffs alike... Abbott's engaging prose is backed by dogged research that buoys the stories with delightful insights."

"Karen Abbott's latest gem is a ticket to a dark and fascinating secret world. Liar, Temptress, Soldier, Spy is a masterwork of suspenseful plots and unforgettable characters rendered in exacting, gorgeous detail—a brilliant new take on the heroines and villainesses of the Civil War."

MORE ABOUT THE AUTHOR…