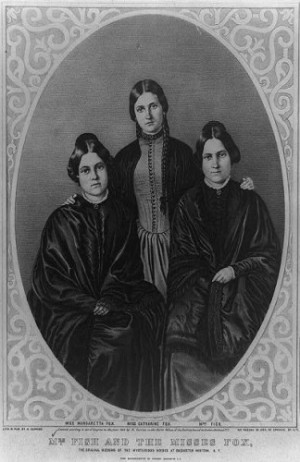 One of the greatest religious movements of the 19th century began in the bedroom of two young girls living in a farmhouse in Hydesville, New York. On a late March day in 1848, Margaretta “Maggie” Fox, 14, and Kate, her 11-year-old sister, waylaid a neighbor, eager to share an odd and frightening phenomenon. Every night around bedtime, they said, they heard a series of raps on the walls and furniture—raps that seemed to manifest with a peculiar, otherworldly intelligence. The neighbor, skeptical, came to see for herself, joining the girls in the small chamber they shared with their parents. While Maggie and Kate huddled together on their bed, their mother, Margaret, began the demonstration.

“Now count five,” she ordered, and the room shook with the sound of five heavy thuds.

“Count fifteen,” she commanded, and the mysterious presence obeyed. Next, she asked it to tell the neighbor’s age; thirty-three distinct raps followed.

“If you are an injured spirit,” she continued, “manifest it by three raps.”