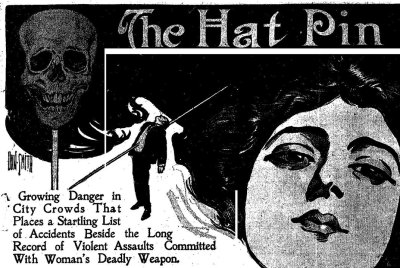 On the afternoon of May 28, 1903, Leoti Blaker, a young Kansan touring New York City, boarded a Fifth Avenue stagecoach at 23rd Street and settled in for the ride. The coach was crowded, and when it jostled she noticed that the man next to her settled himself an inch closer to her. She made a silent assessment: elderly, elegantly dressed, “benevolent-looking.” The horse picked up speed and the stage jumped, tossing the passengers at one another again, and now the man was touching her, hip to hip, shoulder to shoulder. When he lifted his arm and draped it low across her back, Leoti had enough. In a move that would thrill victim of modern-day subway harassment, she reached for her hatpin—nearly a foot long—and plunged it into the meat of the man’s arm. He let out a terrible scream and left the coach at the next stop.

“He was such a nice-looking old gentleman I was sorry to hurt him,” she told the New York World. “I’ve heard about Broadway mashers and ‘L’ mashers, but I didn’t know Fifth Avenue had a particular brand of its own…. If New York women will tolerate mashing, Kansas girls will not.”

Newspapers across the country began reporting similar encounters with “mashers,” period slang for lecherous or predatory men (defined more delicately in Theodore Dreiser’s Sister Carrie as “one whose dress or manners are calculated to elicit the admiration of susceptible young women”). A New York City housewife fended off a man who brushed up against her on a crowded Columbus Avenue streetcar and asked if he might “see her home.” A Chicago showgirl, bothered by a masher’s “insulting questions,” beat him in the face with her umbrella until he staggered away. A St. Louis schoolteacher drove her would-be attacker away by slashing his face with her hatpin. Such stories were notable not only for their frequency but also for their laudatory tone; for the first time, women who fought back against harassers were regarded as heroes rather than comic characters, as subjects rather than objects. Society was transitioning, slowly but surely, from expecting and advocating female dependence on men to recognizing their desire and ability to defend themselves.