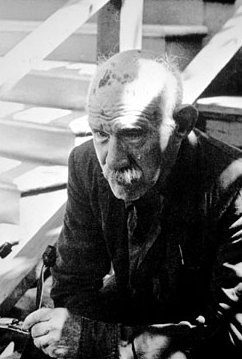 This is an exceptionally strange recluse story: A lonely hospital janitor secretly devotes his life to creating an epic 15,000 fantasy novel about enslaved children fighting a battle alongside psychedelic dragons and hallucinogenic butterflies. But it begins with a too-common tale: the abduction and murder of a little girl…

On the morning of April 8, 1911, five-year-old Elsie Paroubek left her home at 2320 S. Albany Street in Chicago. She’d told her mother she was going to visit “Auntie,” but hours later Elsie still had not arrived. At 9 p.m., Elise’s father reported her missing at the local station.

The tips began filtering in, and detectives focused on one in particular: Elsie had been spotted in a wagon with “gypsies”— a reference to the immigrant Romani community that lived in a camp along the Des Plaines River. The police found this theory plausible; four years earlier, another girl had been abducted by gypsies but escaped. According to newspapers of the time, gypsies—also known as “the wandering people”—had a “natural love for blue-eyed, yellow-haired children.” Elsie fit the description, but several searches of the gypsy camps turned up no sign of the missing girl.

Time only stoked interest in the case. Police were inundated with calls. Rewards were offered. Lillian Wulff, the girl who had been abducted previously, advised police on how to proceed in case gypsies were involved. Elise’s father consulted a medium, who said that the girl was in Argo, Wisconsin. The search stretched from Illinois to Wisconsin to Minnesota and back again, but Elsie remained missing.

On May 9, a month after her disappearance, an employee of the Lockport power plant near Joliet discovered a body floating in a drainage canal. Elsie’s mother identified her. Two physicians performed an autopsy and determined that the girl had been suffocated. They believed she was murdered, but the official cause of death was listed as "unknown.” The Chicago Daily News printed Elsie’s photograph, a haunting, spectral portrait in which she appears transparent, as though a part of her had vanished with the shutter’s click.

Millions of people saw Elise’s photograph, but perhaps none were as affected as Henry Darger. Orphaned and institutionalized as a young child, Darger was classified as “feeble-minded” but was possibly autistic; he claimed he “knew more than the whole shebang in that place.” At age 17, he escaped and found work as a custodian in Chicago hospitals. He never socialized, preferring instead to spend every free moment alone, building an elaborate fantasy world rooted in his favorite works: the Bible, the Wizard of Oz, Uncle Tom’s Cabin.

In 1910, he started work on his opus, The Realms of the Unreal, in which the “Vivian Girls” fight to overthrow the evil Glandelinians—a group of men who wear Confederate uniforms and have names like “Lord Lechery.” The seven Vivian sisters suffer terribly in battle: "Hearts of children were hung by strings to the walls of houses, so many of the bleeding bodies had been cut up that they looked as if they had gone through a machine of knives.” Darger himself makes an appearance as Captain Henry Darger, an ally to the girls. He illustrated the book with elaborate depictions of the girls, often tracing figures from comics and mail order catalogues and newspaper photographs, embellishing them with weapons and, occasionally, penises.

Darger was transfixed by Elsie’s photograph, so much so that he made her a protagonist in his book. When the photograph was stolen from his locker at the hospital, Darger descended into panic. He built a shrine to Elsie and prayed for the photo’s return. God did not intervene, and in a rage Darger tore the shrine down and predicted ruin for the girls.

Darger’s name would have faded into history had it not been for his landlord, Nathan Lerner, a renowned Chicago photographer. In 1973, shortly before Darger’s death, Lerner discovered the recluse’s work. He recognized its artistic value and assumed control of Darger's estate. Today Darger is considered one of the most important figures in outsider art.

Part of his appeal lies in the enduring mystery of his inspiration and his true nature. Was he, as monographer John MacGregor suggested, a kind of suppressed serial killer? A predator? Or simply misdiagnosed and misunderstood? Was he still wounded from never having met his baby sister, who’d been given up for adoption? From the Catholic church’s refusal to let him adopt a child of his own? One thing seems clear: Darger was obsessed with the innocence of children and the evil done to them by the adult world. “Babies,” he wrote, “were more to me than anything, more than the world.”

Before he died, Darger changed his mind and edited the ending of his masterpiece: the Vivian Girls win.